Are You Ready For a Real Theologian?

You don’t come to God by thinking but by praying

Few in our generation have written more perceptively about the challenges of ministry than Eugene Peterson. In a creative but lesser known work, The Wisdom of Each Other: A Conversation Between Spiritual Friends, Peterson writes to an old college friend, “Gunnar,” who contacted him after forty years of “virtual silence.”

Gunnar had recently retired from a highly successful career as an “extraordinarily competent” scientist. But estranged from his kids, two former wives, and, by his own lights, from God, he had lived a rather sad life. Yet now, recalling some of their earlier conversations about faith, he wanted to inform his old friend, “I’ve finally decided to quit competing with God and join him.”

Forty years in the far country, he had many questions. Knowing that his friend was a pastor, Gunnar sought his advice. Peterson obliges, encouraging him, first, to go to church, but not to expect to find “a company of friends” with so much in common. “The church is not a natural community composed of people with common interests; it is a super-natural community. And the super in that word does not mean that it exceeds your expectations; it is other than your expectations, and much of the other is invisible to you as yet.” Yes, going to church can be often humbling and hard. But remember: “It’s the Holy Spirit’s style to fashion holy lives among the inept.”

Peterson warns against many other temptations common to those young in the faith, such as: church shopping, conference hopping, the allure of “boutique spirituality,” and all sorts of “spiritual” fads and clichés. Peterson, in fact, admits he tries to avoid using the word “spiritual” at all: “To often it seems to signal a split between sacred and secular, between inside and outside, between a refined religious sensibility and the coarser necessities of ordinary life like changing diapers, paying bills, and giving good weight in a job you feel stuck with.”

Finally, after a period, Peterson writes, “I think you are ready for a theologian. I mean a real theologian. Especially in this secularizing culture we live in, when virtually all our mental habits are formed by people training us to get what we think we have coming to us and looking out for the big chance, we desperately need men and women at our side who have disciplined their minds to think God: who God is and what he is doing in and among us; what it means to be created and chosen by God and how we get in on what he intends for us. We need help, most of us, in thinking, not just about God, but in terms of God, with God as our presupposition” in thinking about all sorts of things yet never as a mere presupposition in thinking about anything.

“When we start taking the Christian life seriously,” Peterson writes, “it necessarily, of course, involves taking ourselves seriously. But most of us then get distracted from our main task by taking ourselves more seriously than God. And God is our primary concern, not us.” In other words, even when we say, ‘It’s not about us,’ it often turns out to be still primarily about us.

“I know that theology is not stylish in this generation of Christians. When our friends think of going for help for their souls, they usually think in terms of their feelings and egos––their innerness, their hearts––and quite naturally gravitate to counselors, psychologists, and psychiatrists––something along the lines of the therapeutic. But,” Peterson adds, “in matters of the Christian life, and especially prayer, it is the theologian we want at our side, to help us start with God, not just end up with God as a court of last resort.”

At one point, Peterson tells his friend that if he has psychological issues he needs to sort out “go ahead and consult a psychologist, but if it’s God you’re after, get a theologian. Many of the difficulties in prayer come from paying too much attention to ourselves––our moods, our feelings, our fitness to pray. But prayer is paying attention to God. We Christians need theologians far more than we need psychologists. Keep a therapist/counselor in the wings for those times when you need help untangling your self from yourself, but make sure you get a theologian to walk by your side.”

After visiting a Christian bookstore, Gunnar returned home confused and suffering from buyers’ remorse. Peterson commiserates: “All this Christian stuff being written more or less behind your back while all these years you had been off reading your technical journals. … And then the disappointment of finding that you had purchased nothing but extended cheerleader slogans written in bad prose.” “And not one of them qualifies as theology.” Peterson regrets he did not warn him sooner.

“I’m sorry to have to tell you that during the forty years that you were off doing your own thing, having concluded that religion was for ninnies, a considerable number of people in North America wondered whether religion could be marketed as a consumer product for just such ninnies.” Peterson concedes, “They were right. Writing in the market-tested style that so effectively sells automobiles and deodorants, they were similarly successful. Their basic strategy is to locate an area of dissatisfaction in modern life, and then promise God, or something that has to do with God, as the solution.”

By making God “the Answer” to their questions (while assuming they know what the right questions are from the start), these authors consistently domesticate God. Busy, lazy, or patronizing pastors often pass off such pablum to parishioners, assuming they are not willing or able to think more seriously simply because they are not. So instead of settling for such condescending fluff, Peterson suggests, “Why not start at the top? Start with John Calvin. Among Christians of our ilk, he continues to hold the center for biblical soundness and intellectual clarity. Buy The Institutes of the Christian Religion. It comes in two volumes. Make sure to get the translation by [Ford Lewis Battles].” Peterson is not joking.

“If you’re troubled by dust balls of opinion on Calvin that you have picked up through hearsay through the years, do your best to sweep them out with the trash––come to him fresh with a clean imagination. You’ll be surprised at how accessible he is, how sane, how Christian. A truly elegant intellect,” Peterson claims. “Of course, as with anyone writing several centuries ago in another language and culture (sixteenth century, French and Latin), there are many allusions that you will miss and not a few pages that you will pass over rather quickly. But mostly, you can expect to be directed wisely and prayerfully to God––thinking about God accurately, responding to God truly. Calvin brought a biblically disciplined mind and a Spirit-attuned heart to his writing.”

What also commends Calvin is that he was no armchair theologian. “He was a pastor, first and foremost a pastor with a congregation whom he taught and prayed for, visited, baptized and married and buried, whose problems he dealt with and whose faith he guided. He was writing for Christians like you who are trying to get a clear sense of God’s revelation in the cultural/ religious murk of a very messed-up society––messed up mentally and morally. He was not writing a source book for doctrine dissertations. He was writing so that every day Christians with jobs and families could think and say the words ‘God’ and ‘Jesus’ and ‘Spirit’ cleansed from all the misleading distortions and superstitions that we pick up in church street-talk.”

“I guess what I want to convince you of up front,” Peterson writes, “is that real theologians don’t make God more complicated but less. They clear the ground. They simplify our lives, not clutter them. So don’t be intimidated by the big names. If you can read the editorial page of the Wall Street Journal with understanding, you can read Calvin. …”

“But this warning: you don’t come to God by thinking but by praying,” Peterson adds. “Thinking rightly about God in itself doesn’t get us where we want to go. But bad thinking can mess us up considerably. The task of the theologian is not primarily to teach us to think about God but to help us to pray to God––pray to the God revealed biblically in Jesus, and not just piously grovel around in some figment of our idolatrous imaginations. Again, that’s why Calvin is so useful––he was a pastor/ theologian who prayed.”

Peterson is so helpful because he always emphasizes substance. No platitudes. No short cuts. No junk food, even when it is labeled, “Chicken-Soup-for-the-Soul,” and even when it may not be what we want to hear.

Granted, not everyone is ready for a real theologian. Nor does everyone need real theology. It depends on the questions one has and how seriously one takes them. But the ministry of Theology Matters bears witness to the fact that there are still Christians today, especially in the Presbyterian family, who want to grow, think, and pray through various theological questions, challenges, and temptations of our times. You, dear reader, are not alone. There are more of you than most pastors realize. So don’t settle for their fluff. Ask for more meat, please. 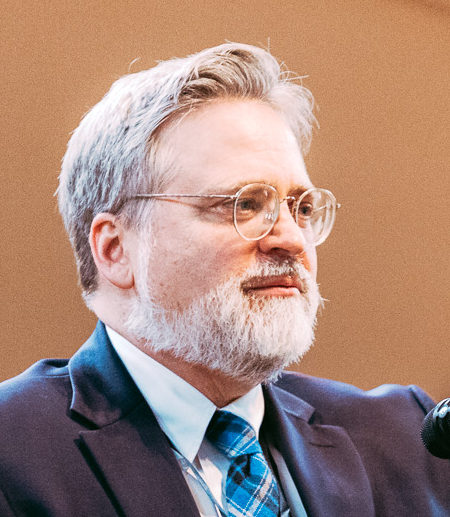 Richard Burnett
The Reverend Richard E. Burnett, Ph.D., is the Executive Director and Managing Editor of Theology Matters.
SourceTheology Matters Vol 24 No 3
Share
Facebook
Twitter
Linkedin
ReddIt
Email
Previous article
Luther, Calvin, and the Recovery of Congregational Singing. Is the Reformers’ Legacy at Risk?
Next article
Preparing for Baptisms And Supporting the Baptized

Clothes Make the Man (or the Woman)?

Do we still believe in the notion of the “preaching office” or the “pastoral office”? Or have we joined the ranks of so much American “free church” congregationalism that replaces the notion of “office” with that of mere “function”?
Authority of Scripture

The Formation of the New Testament Canon

The term "canon" used with reference to the Bible means the collection of books which are received as divinely inspired and therefore authoritative for...
2021 Conference Keynotes

The church’s historic understanding of marriage may be the foremost doctrine under fire at the 220th General Assembly (2012) of the Presbyterian Church (U.S.A.)....
Abortion